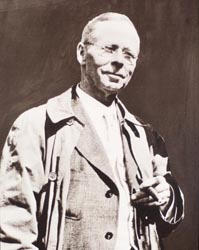 In 1902, Earle helped organize the American Road Makers? (which was later renamed the American Road & Transportation Builders Association?). As part of ARBTA, he proposed a Federally-funded and constructed system of highways that would connect each state capital, in what he called the "Capital Connecting Government Highway System." ARBTA claims Earle as the ideological godfather of the Eisenhower Interstate Highway System?.1

One of his last acts as commissioner was to authorize and fund, with Wayne County Road Commissioner Edward N. Hines?, the paving of Woodward Avenue between Six and Seven Mile. This became the first section of concrete roadway anywhere in the world. Shortly thereafter he resigned as road commissioner.

Earle then tried to parley his road construction advocacy into higher political office. He ran for governor in 1908 and again in 1920, and for Mayor of Detroit in 1912, losing every time.

Citation: When referencing this page please use the following citation:

Unless otherwise noted all content on the Michigan Transportation History site is Copyright © 2020.
Page last modified on January 01, 2020, at 08:48 PM EST